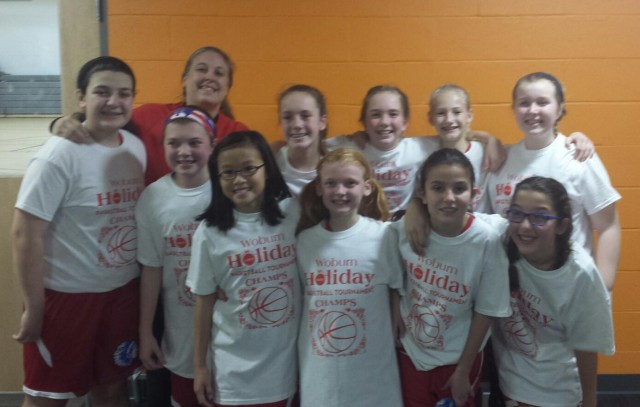 During the frigid week after Christmas 2017, Tewksbury Girls 6 Blue participated in their first tournament as Travel players. They opened with a game against Reading and quickly realized it would not be an easy task to win the annual holiday classic. The physical game was punctuated by a late run by a very determined Reading team, but the feisty girls of 6 Blue squeaked out a 23-21 victory. Their next game was a highly anticipated event against their regular season divisional rival, Burlington.

The early morning game against Burlington lived up to expectations, it was the most exciting of the week and marked the best overall effort by 6 Blue. The intensely competitive game was distinguished by an explosion of offensive basketball by Tewksbury. Burlington doggedly tried and often succeeded in breaking the suffocating press defense employed by Tewksbury, but not often enough for a victory. The final score was Tewksbury 33 - Burlington 19.

The final game for Tewksbury 6 Blue was for the bracket championship of the tournament. The opponent was a gritty Woburn squad playing on their home court. They were confident and very much up to the task of upsetting Tewksbury's chances of taking the title. The back and forth game was an epic defensive struggle, both teams digging-in and forcing unbalanced offensive play. 6 Blue eventually defeated the motivated Woburn squad, 18-11.

The exhausted, but ecstatic 6 Blue were awarded their championship t-shirts shortly after the last cheers of their supportive and exhilarated parents fell silent. Their first tournament ended with a 3-0 record and the bracket win. This collection of team-orientated players are enjoying a lengthy stretch of winning basketball. In the last two seasons they have a combined record of 20-4 (2016-17 season complete, 2017-2018 season incomplete and Woburn Holiday Tournament).

The Woburn Holiday Tournament had many team highlights for Tewksbury 6 Blue, but individually they also soared. Center/Power forward Chelsea Keefe continued her defensive wizardry and revived her Kevin McHale-like moves to the basket. Her consistent play on both ends of the court helped anchor the team during the championship week. 6 Blue's other center, Delia Conte, ruled the paint and grabbed rebounds with alarming regularity. Alarming for the opposition trying to contain the heart of Tewksbury's defense. Delia continued her strong offensive game with numerous chances under the basket.

The forwards for 6 Blue had a tremendous 3-day stretch at the new Boys and Girls Club in Woburn. Brooke Hatch powered through the tournament with her patented move to seal the opposition as the guards/forwards drove to the basket. In the final minutes of the last game, she grabbed rebounds, scored and played solid defense to close out the tournament.  Abigail (Abbey) Dick, the power forward extraordinaire, was a key cog in both the offensive and defensive zones. Her outside shot found its mark and she flourished guarding the oppositions strongest players as a second level zone defender. Her presence was felt all over the court. Mackenzie Hickey and Stephanie Mercurio, playing both the forward and point guard positions, shined all week. Mackenzie, the jump-shooting, fast-break master scored important baskets throughout the tournament. She had multiple game-changing steals in the final game against Woburn. Stephanie carried the ball often as part of 6 Blue's 3 guard set, running the offense and getting important baskets when the team needed them the most. Her tough, determined play gave her many crucial opportunities at the foul line. The newest member of TGBL Travel, forward Cassidy Paige pushed the envelope on defensive dominance with her ability to control the center of the court with lightening speed and unmatched anticipation. She also had key baskets with her Kyrie Irving-like floater from the lane.

The guards of 6 Blue made a difference from the opening tip-off to the closing seconds. Starting with Tea Nickerson, the polished, jump-shooting scorer played a critical role in the first victory against Reading, her finesse and fluidity on full display in the early win.  Aislin Davis showed-off her dribbling skills and speed as she repeatedly drove on the Burlington defenders in game 2, solving the man-to-man defense with great flair. From her guard position she suffocated her opposition, doggedly keeping them at bay and forcing errors in each game. Morgan Crowley played strong defense and had key assists in the Reading and Woburn games. During the Burlington game she had numerous opportunities under the basket off the fast break. Kimsan Nguyen ran the offense with obvious precision and text-book fundamentals. Her end- to-end drives, sharp pull-up shots and tenacious defense, helped her team to three victories.